The purpose of the MSC Jordan Institute for International Awareness Internship and Living Abroad Programs (ILAP) is to provide an opportunity for Texas A&M University students to actively participate in another culture by living and working in a foreign country.

Here you will find more specific details about the ILAP programs, financials, eligibility, application process, and the program’s history.

The MSC L.T. Jordan Institute Internship and Living Abroad Programs (ILAP) will arrange the following as part of the program:

Whenever possible, ILAP dates allow participants to attend summer classes. The ILAPs in England, Spain, and China are concurrent with the 1st Texas A&M summer school session and begin in the middle of May, lasting until the end of June. ILAPs Singapore and Chile are concurrent with the 2nd Texas A&M summer school session beginning in early July, lasting until the end of August.

Students may choose to extend their experience to 10 weeks or longer in order to recieve study abroad or course credit; however, students must make all the arrangements for this independently of the Jordan Institute.

This program cost covers the round-trip airfare, non-paying internship, housing, some meals, and one or two group excursions. Students will be responsible for paying approximately:

Incidental expenses not covered by the fee may include, but are not limited to:

Students may apply for an interest-free loan from the MSC Overseas Loan Fund. Interviews for these loans are scheduled on a monthly basis. Ask the MSC Jordan Institute staff for information about scholarship sources.

This program has a history of changing students’ lives. In 1982 and 1983 the first groups of students from Texas A&M University participated in the Dominican Republic Living Abroad Program which was sponsored by the Memorial Student Center. Unfortunately, the program was set aside due to a lack of resources. After the establishment of the MSC L. T. Jordan Institute for International Awareness in 1986, the program was reactivated and once again began sending students to the Dominican Republic in the summer of 1990. The program was later expanded in 1991 to include an ILAP in Germany and in 1993 to include England.

After the summer of 1999, the ILAP in Germany ended because too few German-speaking students applied. Even with an occasional setback, the ILAP continually expands each year to include more countries:

If you wish to help programs like these continue, please help support them. 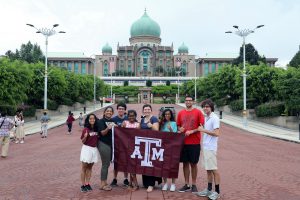